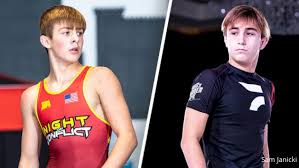 State Tourney Stars And Storylines To Watch This Week On Trackwrestling

Another big week of state championship action is upon us with individual tournament titles on the line in Colorado, Missouri and Ohio.

That means 33 nationally-ranked wrestlers will be vying for titles in the three states. But they won’t all capture championships this week.

Three of the top-10 160-pounders — No. 1 Paddy Gallagher, No. 4 Derek Fields and No. 7 Enrique Munguia — are all in the same Ohio D1 bracket. Ohio’s D1 tournament also features three nationally-ranked wrestlers at 170 and three more at 182.

In Missouri, the Class 4 tournament is headlined by a potential rematch between No. 5 Ethen Miller and No. 14 Kyle Dutton. The returning state champs have battled three times already this season with Miller winning 3-2 and 2-2 in the ultimate tiebreaker and Dutton taking the other on an injury default.

The Ohio state tournament will be streamed live on Trackwrestling while archives of all three tournaments will be available on demand.

Here’s a look at some of the stars and storylines to follow:

— In a typical year, Ohio is one of the final states to stage its state tournament each March. A year ago, Colorado and Missouri wrapped up state tournaments on Feb. 22.

Ohio, on the other hand, never got to the opening whistle. On the eve of the 2020 tournament, the Ohio High School Athletic Association postponed its state meet due to the COVID-19 pandemic. Two weeks later, the OHSAA canceled the tournament.

This won’t be a typical Ohio state tournament. It’s not being held at Value City Arena in Columbus. For the first time in 43 years, the tournament won’t be staged under one roof. Instead, the mats will be rolled out at three high schools — Hilliard Darby (D1), Highland (D2) and Marion Harding (D3).

— The Saints have been marching through the Ohio state tournament for the better part of the past two decades. Perennial powers St. Paris Graham and St. Edward piled up title trophies and championship streaks. St. Paris Graham had won 19 consecutive D2 titles prior to last year’s cancellation and St. Edward was on a run of five straight in D1 and 21 of 23.

Both squads are favored again this year.

— Gallagher has put together one of the most impressive resumes in high school wrestling. The Cliff Keen national preseason wrestler of the year put on a dominant display two years ago in Fargo, where he outscored the opposition 78-15 en route to a Junior freestyle title. The Ohio State recruit owns a win against top-ranked 170-pounder Alex Facundo. And he earned his first Ohio state title two years ago by toppling national No. 1 Connor Brady in the finals.

Gallagher is the favorite again this week, but there are other highly credentialed competitors in the bracket. Fields was a Cadet World Team Trials finalist two years ago in Akron and Munguia reached the state finals two years ago as a sophomore. Like Gallagher, they’ll wrestle in college as well with Fields headed to North Carolina State and Munguia to Kent State.

Fields and Munguia are on the bottom side of the bracket this week with Gallagher up top. Gallagher posted wins against the other two nationally-ranked contestants in last week’s district tournament, beating Fields 16-7 in the semifinals and Munguia 12-7 in the finals.

— Victor Voinovich established himself as one of high school wrestling’s top rising stars three years ago when he reached the Beast of the East finals as a freshman at 145 pounds. He followed that up three months later by winning an Ohio state title, and the Brecksville senior has been a consistent performer ever since.

He placed third at the state meet as a sophomore after losing 4-3 to Munguia in the semifinals. The following summer, he blitzed through the Junior Duals, going undefeated and scoring shutout technical superiority wins in six of his seven wins.

Voinovich moved to the top of the national rankings for a stint last year and he enters this week’s tournament ranked second at 152. The Oklahoma State recruit takes a 27-0 record into the state meet. His bracket includes two other undefeated wrestlers — Perrysburg’s Alex Garee and Huber Heights Wayne’s Austin Mullins.

— Three of the nation’s best 182-pounders will be on display in Ohio’s D1 bracket: No. 17 Salvatore Perrine (Nordonia), No. 18 Jake Evans (Elyria) and No. 20 Hudson HIghtower (St. Edward). Evans placed fourth at the state meet two years ago and handed Hightower his only loss of the season, a 3-1 decision in the district finals. Perrine is undefeated and owns a 3-2 win over Evans this season. The bracket also includes Owen Amburgy, who’s 28-0 this season, and sophomore Camden McDaniel, who’s 38-1.

— It’s been a short senior season filled with twists and turns, but Vince Cornella is on the verge of Colorado high school wrestling history this week. The three-time state champ from Monarch High School will aim to become the state’s 29th four-timer this week in Pueblo.

The nation’s fourth-ranked 132-pounder — Cornella is competing at 138 in the postseason — didn’t wrestle his first match this season until the regional tournament.

After Monarch returned to the mat, Cornella dealt with injuries that kept him on the shelf.

So Cornella enters the state tournament with a 3-0 record. His season has lasted 2 minutes, 50 seconds to this point. That’s how long it took him to pin his way through the regional tournament.

— Missouri’s tournament will be spread across five days this year with each division wrestling from start to completion in a day. The big schools take the mat on Saturday, featuring all nine of the Missourians who are listed in the latest Trackwrestling national high school rankings. One of those is Nixa’s No. 10 113-pounder Zan Fugitt, a returning state finalist. His path to the finals could include a semifinal battle with double Fargo All-American Kolby Warren of Christian Brothers College. They tangled last fall at the Super 32 in the round of 16 at 106. Fugitt won a 7-0 decision.